Knowing you have congenital amusia makes a difference 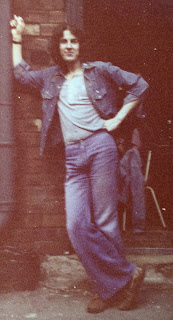 Finding out that I had amusia made a big difference to my life and I talk about some aspects of this in an article here. The point of the article is that I am thankful to know that my inability to carry a tune or learn a musical instrument is not due to laziness, sloth, or weakness of character. Those are qualities that are routinely ascribed to people with amusia. Here's some more of what I said:

I’m sure I could write a whole chapter about how much it hurt to suffer those accusations, the self-recrimination and doubt that it induced. I know I could have done without the castigation of teachers who were sure I could learn to play the recorder – a rite of passage in English schools of the 1950s and 60s – if only I would apply myself.

Then there’s the chapter on how frustrating it was to grow up in the sixties with a strong poetic streak but no ability to voice the songs I composed, not to mention fruitless hours failing to learn guitar. Sure, I could pose for the album cover, but I was never going to be on the album. But today I’d much rather give thanks for the unexpected gift of this diagnosis: the empathy it has given me for this thing called neurodiversity, the growing realization that human beings are not all wired the same way.

January 01, 2020
Welcome to 4Amusia.com, a place to find out more about something called amusia. For those who are not familiar with the term amusia, here is what Wikipedia says about it: "Amusia is a musical disorder that appears mainly as a defect in processing pitch but also encompasses musical memory and recognition." (This is a "sticky post" dated in the future so it always appears first.)

Studies suggest that about 4% of people are born with amusia. This is referred to as congenital amusia, which has been described as "a deficit in fine-grained pitch discrimination" (Wikipedia).

I recently learned that I am one of those people and that discovery has impacted my outlook on life in numerous ways, some of which may be hard for some people to understand (based on my initial efforts to describe them).

On this site I plan to blog about my own journey with amusia, while posting commented links about amusia. Those link posts will be brief posts and should not be taken as en…
Read more

August 15, 2019
The idea that lack of musical ability comes from lack of effort on the part of the tone deaf individual persists in some circles, including those who earn income from singing lessons.

Congenital Amusia Disorder? Really?? Please.... - Singing From Scratch: Here we have a singing coach, Michael Graves, who does not accept that congential amusia is a thing: "I do not believe in the permanency of tone deafness. I believe that it is a low level of proficiency that can be overcome, not a condition."

This is a great example of the attitude I have dealt with all my life: all I need to do to overcome my tin ear is to do the work. Here is the worldview that leads to that conclusion: "The only purpose most disorder labels serve is to provide the “afflicted” an easy path away from persistence and success and towards failure and acceptance."

This outlook is often sustained through wilful ignorance of scientific research and twisted logic, for example: we don't know what caus…
Read more

November 29, 2019
The shaming of amusiacs for being weak-willed individuals who can't sing in tune because they don't try hard enough is - I am sad to say - still a thing. Yet there is plenty of evidence that the condition has a genetic component.

Consider this article out of the Department of Genetics at Stanford School of Medicine: "With some number crunching the researchers concluded that between 71 and 80% of tone deafness can be explained by genetics" Understanding Genetics Tone Deaf Genetics.

It was 60 years ago this month that my primary school teacher called me out in class and told me - and the rest of the class - that I had a 'tin ear.' She then ordered me to 'pretend to sing' when our class went on stage to sing carols during the school Christmas concert. The year after that I was told to not only mouth the words to the carols. but also pretend to play my recorder (a traditional English flute that I could never learn to play).

Growing up in England, I was ob…
Read more

Stephen Cobb
Award-winning technologist and bestselling author, now working to understand and undo the mess that patriarchy has made of technology and our planet. Have spent more than three decades researching, writing, and teaching at the nexus of technology, ethics, crime, and public policy. Spoke at DEF CON III in 95. CISSP since 1996. Pushing for more ethics in technology education and global agreements to increase stability in cyberspace. Started two successful infosec companies. Produced an award-winning documentary about civil rights (file under: made no money, but made a difference). Raising awareness of hereditary hemochromatosis (the widely under-diagnosed genetic defect that disabled my partner). MSc in Security and Risk Management from the Criminology Department of the University of Leicester, England. Failures? Nearly lost it all in the Great Recession. Can't sing or play a musical instrument (due to congenital amusia, not a defect in my character).