Emotion processing in congenital amusia: the deficits do not generalize to written emotion words

There is something to be said for academic article titles that give you the bottom line. In this case, the bottom line is that, as a congenital amusic, I am probably better able to convey my emotions in written words than a face-to-face conversation. (This makes a lot of sense to me when I think of all those poems I wrote to girls when I was a teenager.)

FYI, an amusic is a person who has amusia, which is "a musical disorder that appears mainly as a defect in processing pitch but also encompasses musical memory and recognition" — Wikipedia. You may also see the word amusiac used for a person with amusia.

So here is more of what the article abstract says: "Results showed that participants with amusia preformed significantly less accurately than controls in emotion prosody recognition; in contrast, the two groups showed no significant difference in accuracy rates in both written word tasks (emotion recognition and valence judgment)."

So, while my amusia turned many music lessons at school into a form of torture, I was still able to win the school prize in English (twice). Also, and this is true, I once aced a test in Music class because it was an essay question that involved describing orchestral sounds.

The abstract is here, but sadly the full article is not (access costs forty quid, even if you suffer from the [allegedly] rare condition being researched). 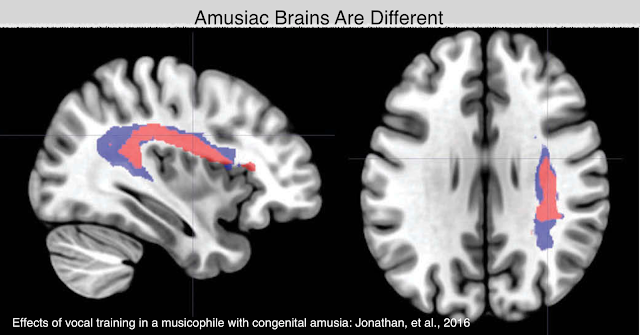 The main purpose of this blog post is to introduce people to an excellent piece of amusia research titled: Effects of vocal training in a musicophile with congenital amusia . If you want to dive right into it, here is a link to  the article as a PDF file . If you want a little more context, please read the following. The Scenarios of Johnny and Barry Many people may be familiar with this scenario: Johnny is having trouble learning to read. His teachers say he must try harder, but however hard Johnny tries, he still has trouble reading. Rumors spread that Johnny is lazy, or stupid, or both.  Then someone realizes Johnny has Congenital Word Blindness, better known as dyslexia, which these days is a widely-acknowledged learning disorder. In many progressive communities that diagnosis opens the door to sympathy, understanding, and resources developed to help Johnny deal with his disability (in the UK, dyslexia is classed as a disability under the Equality Act of 2010). Here's anothe
Read more